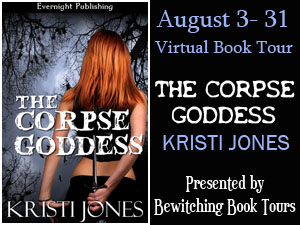 The Corpse Goddess
By Kristi Jones

Party girl Meg Highbury wakes up the morning of her twenty-first birthday with one hell of a hangover – and a walking corpse in her apartment.  Meg turns to her straight-laced neighbor Armando for help and together they discover that Meg is a Valkyrie.

What’s more, her first duty is to trade places with the corpse.  But Meg is being sent to her Death Duty too soon. In a race against time, Meg frantically tries to find a loophole to her gruesome fate, but while Meg is determined to live whatever the cost, Armando's strict moral principles keep getting in the way of her plans for escape.

Can Meg walk the 'right' and narrow path, possibly sacrificing her mortal life, for love? And if she can, will Armando have the stomach to love a rotting corpse of a girl who is falling apart in more ways than one?

Tee picked up on the third call. “Wha’ is it?” Tee mumbled, obviously still half asleep.
“Tee. What. The. Hell?”
“Whosis?”
“It’s me, Meg. What the hell was in those drinks last night?”
“Drinks?” Tee coughed. Meg heard the flick of a lighter, the gentle grind of flint against steel, and waited for Tee to suck down her first drag of the day. “What’re you talking about?”
“The wine,” Meg said, her voice a screeching tire. She kept her eyes on the zombie. She stared at it for two reasons. One, to be ready in case it made any sudden moves. And two, hoping that it would suddenly vanish, and she would be free to get off this freak show carnival ride. “The Merlot we had last night. In the graveyard.”
“Oh, yeah. That. Why? What’s up? You want some more?”
“No,” Meg said, biting back a scream. “I do not want some more. I want to know why there is a freaking zombie standing in my apartment.”
“What happened to you last night? Danny was asking for you.”
“Tee, listen. Focus. I need to know. Did you put something special in the wine? A little birthday boost?”
Tee laughed. “Shit, Meg. Did you sleep with Danny?”
“What?”
“He is a lousy lay. No doubt. Thinks he’s in love with you, right?” She laughed again. “Kick his ass out, girl. He’s got no business staying over if you want your privacy.”
“I don’t want my goddamn privacy, Tee! I have a zombie in my apartment!” Meg screamed. The zombie jumped at the sound of her scream, as if a bolt of electricity had suddenly brought the thing to life.
“Stay back!” Meg said in a pleading tone of voice. Her heartbeat went into overdrive, and it set her teeth chattering painfully together.
“Whoa,” Tee said, obviously offended. “Don’t get all commando on me. Not my fault you fucked up and shagged a loser.”
The zombie jerked its right leg forward. Then the left.
“Oh, shit,” Meg whispered, tears rolling down her cheeks now. “Shit, it’s coming.”
“Meg, you really need to get a grip. Just say no, girl. Just because it’s coming, doesn’t mean you have to take it.”
“I don’t think I have any control over that, Tee,” Meg said, explosions of fear wracking her body.
“You want my advice? Sleep it off, Meg. I’ll talk to you tomorrow.”
“Tee, wait…”
Meg heard a click and then the dreaded dial tone. Her best friend, her only real friend, had disconnected the call.
The zombie jerked toward her, snapping and creaking with every step. Meg crab-walked backwards, scuttling off her bed and landed on the floor with a painful thud.
Her mind racing, playing catch-up with what her eyes were seeing, Meg tried to come up with a plan. She could shove the thing, hard enough to make it fall, maybe into a hundred pieces like one of those plastic toy snap skeletons her parents liked to give on birthdays. The next part of the plan was easy. Run. Run away as fast as her feet would carry her.
Her studio apartment was just under five hundred square feet. The front door was not more than a few paces away.
But what if the thing moved faster than she expected, like a lazy alligator suddenly darting for the kill?
She still had her phone in her hand, but whom could she call? Meg didn’t have many close friends, and you couldn’t call a casual acquaintance to help with a walking corpse, real or imagined.
The zombie walked around the bed, coming for her. The smell emanating from the thing was turning the wine in her stomach to vinegar, but Meg swallowed back the nausea. She threw back the comforter and clambered off the bed, keeping her eyes on the zombie. Pieces of rotting gray cloth and leaves fell to the floor.
It was coming closer, no more than three feet away now.
Meg’s heart ran a thumping rhythm inside her chest, and she broke out into a cold sweat that left her shivering on uncertain legs.
“Stay back,” she said, but the thing stepped closer, its bare knee bones peeking through the shredded trousers.
Panicked, Meg lunged forward, legs scrambling, stomach lurching. She thrust out her hands, making contact with the zombie.
The impact, when it came, was like a jacked-up haunted house gimmick. She felt her fingers plunge through the fabric of the thing's tattered white shirt as her hands sank into its rotting chest. The flesh beneath its shell of leathery skin was surprisingly gooey. Her hands sank into the gelatinous mess, and she had a fleeting thought that this was how people went crazy. She could feel her mind slipping away from the shocking reality of her predicament and into a deep, dark hole somewhere in the depths of her mind.
And then the rancid flesh embraced her, pulled her in. An intense burning triggered her hands to start shaking, and the sensation traveled up her arms. She screamed and tried to pull her hands away, but they stuck, super-glued to the monster. A bolt of blue ran across the zombie's chest. Meg screamed again, howling like a wounded animal, desperately trying to free herself from a nightmare she didn't quite believe in.

Changes by David Bowie
All This and Heaven Too by Florence and the Machine
Monsters by Matchbook Romance
When We Were Young by The Killers
Sweet Child of Mine by Guns N Roses
99 Problems by Hugo
Demons by Imagine Dragons
Ain't No Grave by Johnny Cash
Dead! by My Chemical Romance
Carry Me Down by Demon Hunter
Gravedigger by Willie Nelson
Ride of the Valkyries by Richard Wagner
Everybody's Changing by Keane


What is your favorite critter that goes bump in the night?

An armadillo! Seriously, I live in Texas and they’re always running around the neighborhood at night. They freak me out, with their dinosaur skin and weird hobbling walk!

You know, I think I first got interested in zombies back in the 80s with The Return of the Living Dead. I loved the humor in that film because really, the whole idea of zombies is sort of ridiculous…and yet incredibly frightening at the same time.

Where did the storyline to Corpse Goddess come from?

I guess I’ve always had a macabre fascination with what happens to our bodies after we die. When zombie fiction and zombie films started to make a ‘come back’, I started thinking about what it would be like to become a zombie. I’ve always had a thing for Valkyries and somehow the two things just blended together in my mind. There are a lot of myths and legends from around the world dealing with the dead walking the earth…I tried to create a world where this is really happening.

What was the toughest scene you ever had to write?

One of my beloved characters doesn’t make it. That was tough. I love the character and I kept taking breaks. Killing your darlings is never easy!

Both! I love The Walking Dead, but of course the humor in Zombieland really strikes home for me. Sorry, can’t choose one over the other!

Shaun of the Dead vs. Fido?

Shaun of the Dead, hands down! Love that film!

Who are some of your favorite authors?

In the book, the main character wakes up and has a zombie kind of hanging out. Did zombies give you nightmares as a kid and what would you do if you woke up with a zombie in your room?

When I was about six or seven years old, we lived in England. I used to follow my parents around, visiting old churches to do brass rubbings. There were always graveyards in the churchyard. One time, I saw an open stone coffin…these stone coffins or sarcophagi are all over Britain…and went to investigate. To this day, I don’t remember what I actually saw, but I remember this feeling of a terrible presence. I’ve been afraid of the rising dead since that day.

If I woke up and found a zombie in my room, I’d probably try to talk to it! I also think I’d be like Meg and not quite believe it.

Oh, a machete for me…I’m not strong enough to inflict much damage with a baseball bat, but I think I might do okay with a machete!

What are you currently working on?

I’m finishing up a paranormal romance tentatively titled An Inconvenient Ghost. It’s about a no-nonsense scientist, Raine Cunningham, who is haunted by her Dad’s ghost. She doesn’t really believe in the supernatural, but having exhausted all other options, she is forced to seek out the help of a gorgeous medium to try and get rid of the ghost before her impending nuptials. Dad’s ghost has a purpose though and Raine’s desire for a normal life is wildly derailed!

When I finish that, I’m diving into the second Corpse Goddess book!

Thanks Kristi for hanging out with us today! 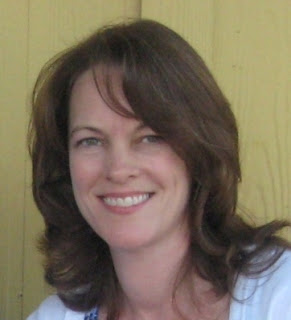 She currently lives in south Texas with her husband and two children, who inspire her daily.  She is a member of the Writers’ League of Texas and Romance Writers of America.  She loves old movies, being a Mom, the feel of paper in her hands and things that go bump in the night.