A deal with the Devil. Demons haunting your every step. When an Angel offers you the chance to redeem yourself, you take it. Because eternal damnation isn't all it's cracked up to be.

But the Devil always gets his due.

On the streets of Baltimore redemption is..... Payable On Death.

Welcome to Charm City
Take a tour of Jax’s Baltimore
Baltimore has been in the spotlight in recent years, and not in the way its residents would like. Listed as the nineteenth most dangerous place in the world, the city has certainly seen better but days. But, even amidst the drugs and violence that have over taken certain neighborhoods the people of Baltimore have a deep rooted love for their city. When you wipe away the grit and grime, it’s not hard to see why. From the birthplace of famed baseball player Babe Ruth to the home of beloved author and poet Edgar Allan Poe, Baltimore’s history is as unique and interesting as the people who live there today. With an accent unique to the nine districts that make up the city, Baltimore and its residents still have a lot to offer.
The idea for Payable On Death came to me when I was driving through the city. It seemed only fitting for it to be Jax’s home town. Let’s take a tour of Jax’s favorite places, all of which really do exist in Baltimore and see why despite its darker side Charm City is really a diamond in the rough. A lot like our heroine, Jax Rhoades.
Welcome to Bal’more, Hon. 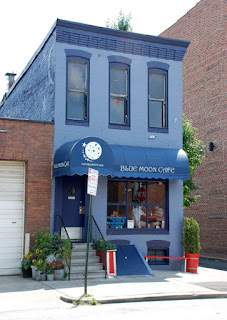 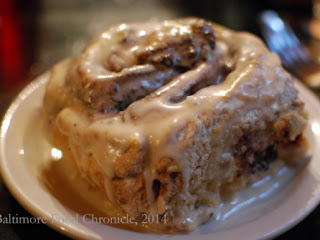 Early in the book, Jax stops at one of her favorite restaurants, Blue Moon Café- known for delicious breakfast treats like their cinnamon rolls and Cap’n Crunch French toast, it’s not hard to see why she’d go there for carb laden comfort. 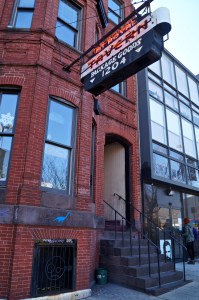 Baltimore Boxing Club, Jax’s refuge from the reality of selling her soul and being followed by demons is as full of prize fighters and trainers in real life as it is in Payable On Death. 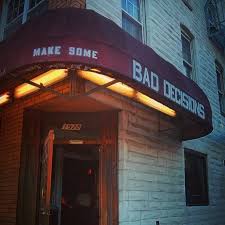 With a name like Bad Decisions, was there really anywhere else a girl who sold her soul could work? 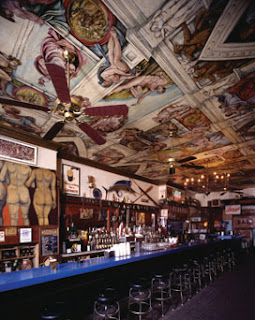 Mount Royal Tavern plays a huge role in our story as a meeting place for Demons and Angels. More than one deal has been struck beneath its Sistine Chapel replica ceiling. I couldn’t think of a better setting! 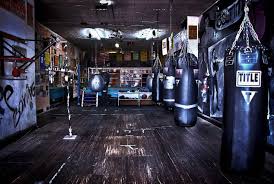 Thanks for joining me on a tour of Jax’s Baltimore. Known in the late eighties and early nineties as the City That Reads, that moniker still holds today. Baltimore is home to one of the largest free book festivals in the country. Whether you’re in town for Baltimore Book Festival or to see any number of its tourist attractions, why not check out some of these local favorites. They’re well worth the trip! 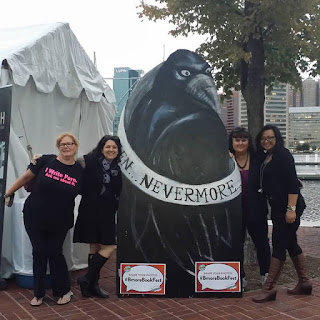 From the first page I was hooked. The desciptions of the city, from the crime to the streets and the pain of someone who knows the rough side of family life, this book grabbed me. I wanted to scream with Jacqui when she was faced with the decision to go with the oh so perfect stranger on the chance she could save her mother from the monster who was her husband. Wow.

The cover also struck me, reminding so much of the Diana Rowland zombie books-so of course I was gonna give this one a shot before the first word hit my eyeballs.

Rachel Rawlings was born and raised in the Baltimore Metropolitan area. Her family, originally from Rhode Island, spent summers in New England sparking her fascination with Salem, MA. She has been writing fictional stories and poems since middle school, but it wasn't until 2009 that she found the inspiration to create her heroine Maurin Kincaide and complete her first full length novel, The Morrigna.

When she isn't writing, Rachel can often be found with her nose buried in a good book. An avid reader of Paranormal/Urban Fantasy, Horror and Steampunk herself, Rachel founded Hallowread- an interactive convention for both authors and fans of those genres.

More information on Hallowread, its schedule of events and participating authors can be found at www.hallowread.blogspot.com  and www.facebook.com/Hallowread .

She still lives in Maryland with her husband and three children.

They called it the murder tree.

In 1995, twenty kids went in to the woods. Only three came back.

There are monsters in the woods.

Twenty years later, what happened is still a mystery.

The monsters are back.

Now, the town of Silk faces its greatest threat in over two hundred years. No one is safe.

Not even the monsters.

Available for Pre-Order at Amazon

Monsters in the Woods

Villains are fascinating. Even when they’re horrible, even when they do horrible things, there’s something about the bad guy that draws us to them. It’s why zombies are so popular, why Darth Vader is a cultural icon, why people are pretty much in love with Loki (although that also might have something to do with the actor). Being bad is cool.
So when I started thinking of the individual behind the very horrible things happening in the town of Silk, I was faced with a dilemma. How do I make this person so, so bad that their actions are unredeemable but not so bad that people will automatically hate them?
In the end, I did three things:
1)       I gave them a traumatic childhood experience
2)       I gave them a stifling, stultifying environment
3)       I gave them someone to love
It’s the last one that I believe really drives home the idea that even horrible people aren’t entirely monsterous. It’s also much more terrifying than if a villain didn’t have a heart. It’s easy to write off the actions of a person when they have no redeeming quality—there’s nothing “normal” people can relate to. But realizing that the person responsible for death and destruction and mayhem loves, hurts, cries… all of a sudden the monster isn’t a monster. All of a sudden, they’re human.
And realizing the monster could have been you?
To me, that’s just about as scary as it gets.

Wow. If you like a good thriller then this is for you. There are monsters in the woods...and a page turning story to get you reading long past lights out. Interesting characters and a fun plot...I liked it very much! It was so much like one of my horror movies I couldn't put it down.

The crying woke him up.
At first it was just part of the dream. A good dream. A dream where Mandy Jones was dancing with him at prom, telling him how awesome he was and how great he looked and how much she loved him. And then he heard crying but when he looked at Mandy she was still smiling and telling him how she couldn’t wait to kiss him.
“Elias, wake up. Wake up, Elias, wake up.”
“G’way.” He rolled over, smashing his face in the lining of his sleeping bag. “Sleeping.”
“Wake up, please, Eli.”
At the use of his childhood nickname, he rolled back over, opening his eyes until he was able to squint through heavy lids. “Shep?”
“Quiet.” She cupped her hand over his mouth, leaning down and pressing her lips to his ear. When her cheek touched his, he realized the smooth skin was wet. “We have to run before he finds us.”
He tried to speak again, glaring at her in the dark when she dug her nails in to his jaw. After a moment, he realized she was attempting to turn his head. Rather than struggle, he let her, blinking in an effort to get his eyes to adjust to the nearly non-existent light.
At first he thought someone had thrown a sleeping bag over a branch. Stupid kid stuff. But the longer he stared, the less sense that made and the more details he began to see. Like how it—whatever it was—was thinner at the top, like a rope, before becoming pudgy and then narrowing down to a gentle v shape. How it swung back and forth slowly like an overweight pendulum. How it made a wet, gurgling sound which raised the hairs all over his body.
And then the moon broke free of the clouds and Elias realized it wasn’t a sleeping bag. Not even close.
And it wasn’t the only one hanging from the branches of the murder tree.
He started to scramble to his feet—to run or hide or help his friends—only for Shep to yank him back down. Her voice was tight and thin when she said, “They’re dead. They’re all dead. We have to go.”
Nodding dumbly, he let her pull him further away from the tree, deeper in to the woods. She’d begged and pleaded and whined until he’d agreed to sleep next to her, as far away from the fire as possible while still being in the clearing. The tangle of bushes had provided extra coverage against the northern wind, something he’d been thankful for as the fire died down and the cold set in.
“My shoes.” Even though he knew he spoke, he was barely able to hear himself through her hand. “Shep.”
“There’s no time.” As if to prove her point, she stomped her own bare foot on top of his. “Come on.”
In the darkness behind them, someone giggled.
They ran.
Elias glanced over his shoulder, nearly tripping and falling when he saw a fire, this one easily twice as big as the one Albert had so carefully built hours earlier. And standing around it were a half dozen figures, lit by the ghoulish flames.
The faces—long, narrow, big-eyed, slack-jawed, smiling, drooling—were the last things Elias remembered for a very, very long time. 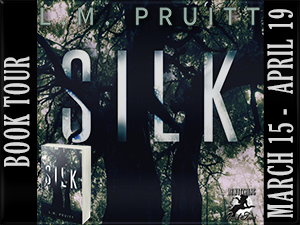 About the Author:
L.M. Pruitt has been reading and writing for as long as she can remember. A native of Florida with a love of New Orleans, she has the uncanny ability to find humor in most things and would probably kill a plastic plant. She knows this because she's killed bamboo. Twice.  She is the author of the Winged series, the Plaisir Coupable series, Jude Magdalyn series, the Moon Rising series, and Taken: A Frankie Post Novel.
http://www.lmpruitt.org
https://www.facebook.com/pages/LM-Pruitt/364776895104
https://twitter.com/lmpruitt
http://www.amazon.com/L.M.-Pruitt/e/B00427WOW4/
https://www.goodreads.com/author/show/4320796.L_M_Pruitt


Please visit http://www.lmpruitt.org/SILK.php  for details
Posted by Unknown at 2:00 AM 1 comment: