Darklands: The Blog Tour and Giveaway 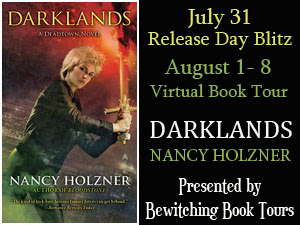 DARKLANDS
By Nancy Holzner
Book #4 in the Deadtown series

They call it Deadtown: the city’s quarantined section for its inhuman and undead residents. Most humans stay far from its border—but Victory Vaughn, Boston’s only professional demon slayer, isn’t exactly human…

Boston’s demons have been disappearing, and Vicky’s clients are canceling left and right. While fewer demons might seem like a good thing, Vicky suspects foul play. A missing Celtic cauldron from Harvard’s Peabody museum leads her to an unwelcome conclusion: Pryce, her demi-demon cousin and bitter enemy, is trying to regain his full powers.

But Pryce isn’t alone. He’s conjured another, darker villain from Vicky’s past. To stop them from destroying everything she loves, she’ll have to face her own worst fear—in the realm of the dead itself.

“Ms. Holzner truly delivers with this incredibly solid debut UF novel. Deadtown is told with an authoritative voice starring a great new heroine, and puts an imaginative spin on the usual paranormal suspects; the plotting and worldbuilding are compelling and undeniably fresh.
“In short – I absolutely loved Deadtown.” ~Reviewed by Thea at The Book Smugglers


Deadtown is a welcome addition to the urban fantasy landscape. Nancy imbues an emotional aspect into her debut that resonates with our own past prejudices and fears and forces us to evaluate our beliefs about this unreal world in a very real way. There is a lot of great action, social commentary, and a dash of romance in Deadtown. The world building, borrowing heavily from Welsh mythology, is fresh and complex. Vicky is instantly likable and realistically tough yet vulnerable. And I can't wait to read more.  ~Abigail at All Things Urban Fantasy


Deadtown was one of the most unique books I have read and I spent an hour gushing to my husband about the world. I am so glad that Nancy brought her monsters out of the closet in Deadtown! ~ Reviewed by Robin at Intense Whisper

The world that comes to life in this series is chock full of emotional impact, characters that practically breathe and a twisting plot that never ends. The action is spot on, something that is a challenge to write, as I am learning with my own work. Harpies, zombie classroom show and tell, demon hunting and vampires...that is just the beginning. I haven't read the earlier books in this series, but after reading this book, I will be going back and looking into the rest of them. Nancy Holzner does a superb job of crafting a world that I wouldn't mind spending some time in.

Damn. It ended. (But at least I can go and get the other books in the series!)

If you love a good supernatural story with zombies (well, of course you do, you're here, aren't you?) harpies, sexy vampires, demons that are a little cranky, and some other surprises, then you are in for a treat. This book sucked me in and didn't let me go. I will be in search of the other books. Dialogue and action are a deal breaker. You all have read a story that doesn't flow right because of a glitch in how the author tries to purvey a sequence of events. I struggle with this myself in my own work. Simply put, you know it when you see it. The biggest compliment I can give is when I don't stop to notice something is off. When you can suck me into a story and I can walk around there awhile, you have me as a fan. Nancy Holzner does that in spades. You are there with the characters and feel each breath (or not) that they take. I highly recommend this novel.

Calling a spirit is tricky business. To do it right, you need a ritual dagger, along with candles, incense, salt, and an altar loaded up with all kinds of magical paraphernalia. Except for the kitchen salt shaker, I didn’t have any of that. What I had was my intention.

I stood in the center of the living room, having pushed its few pieces of furniture against the walls. I took a couple of minutes to get centered, breathing deeply and going inside myself. Breathe in . . . breathe out. Breathe in . . . breathe out. No thinking, no guilt, just a steady focus on each breath. When the world seemed to pulse in time with my heartbeat, I opened my eyes. I pointed at the cabin floor and moved in a slow, clockwise circle. I concentrated on my intention: protection. I projected my will from my brain, my heart, down my arm and through my pointing finger, creating a sphere of protection around me. Nothing could enter the circle unless I allowed it.

Then, I called the Night Hag. I pulled up everything I knew about her legend. I remembered the terror I’d felt as a child—lying in bed, sure she was coming for me, pulling my pillow over my head to block out the sound of galloping hooves. I could see the pages of a book of Welsh folktales, one from Mab’s library, where I’d read her story. I felt the uncanny shiver that had tingled through me when, walking alone at night in a dark Welsh lane, I’d felt something pass by. My pulse pounded like those galloping hooves. My whole body trembled with the desire to run, to flee, to stay out of range of the hag and her pack of hellhounds. But I stood my ground.

And I called her to me.

“Mallt-y-Nos!” My voice rang out with a confidence I didn’t feel, pushing past the cabin’s walls. “Matilda of the Night! Lady of the hunt! Mistress of Hounds! Night Hag, who drives lost souls to the Darklands! I, Victory Vaughn, do invoke thee!”

The words echoed back to me, then faded. My intention cut through the silence, as I held the image of Mallt-y-Nos in my mind. A silhouette on horseback, shadowy against the moon, long hair flying behind her as she rode. She reined in her horse and cocked her head, listening. I called out again: “Mallt-y-Nos, come to me!”

In my imagination, the hag wheeled her horse around. She whistled to her hellhounds. Shrieking a bloodcurdling hunting cry, she raced toward me.

“Come!” I shouted, shrieking too, raising the volume to blot out the horrible sound of the hag’s approach. “I command thee!”

Hounds bayed and howled in the distance. The sound grew closer. The ground shook as thundering hooves pounded closer, closer. I clamped my hands over my ears and kept shouting. I wasn’t saying anything now; I was just making noise. Anything to fight the terror of her approach.

An explosion jolted the cabin as the wall collapsed. I staggered back a step, almost falling, covering my face with both arms. A tingle in my shoulder told me I’d bumped into my protective magical barrier, and I jerked forward. I had to stay inside the sphere.

I dropped my arms to see what I’d called

I stared into the fiery, red eyes of a massive steed. Flames shot from its nostrils, but they broke to the left and right before they reached me. Hounds leapt forward, jaws snapping, but they couldn’t reach me. My protection held.

“Quiet!” shouted a woman’s voice. The hounds fell back, milling around the cabin. The wall they’d burst through remained intact. The half-dozen hounds that crowded the place didn’t look like any dogs I’d ever seen. Each was the size of a small horse. Their eyes glowed red and orange, lit by inner fire. Saliva dripped from their fangs; it sizzled when it hit the floor.

The horse turned sideways, and Mallt-y-Nos came into view. I blinked. This was the Night Hag? The woman astride the horse was young and beautiful, with blue-green eyes and golden blonde hair that flowed, shining, to her waist. She looked nothing like the nightmare hag that had terrorized my childhood imagination. “Why have you summoned me?” she demanded, regarding me imperiously from her demonic steed.

Before I could answer, her face changed. Wrinkles formed around her eyes, on her forehead, between her nose and mouth. Her blonde hair faded to gray, then bleached white. Her skin went from creamy to blotchy red to jaundiced. I gaped, unable to look away, as the beautiful young woman sagged and faded into an ancient crone. Finally, the hair thinned to a few wiry strands. The skin shriveled and peeled away, baring the skull beneath. Flames consumed the eyes, leaving only a red glow.

I looked into the face of death.

The cycle began again. In the course of a few minutes, Mallt-y-Nos flowed from youth to middle age to decrepitude and death. And back again. And then again. I stared, fascinated, almost forgetting the terror of her presence.

In her death’s-head form, she pointed a skeletal finger at me. “Why did you call me?” she asked again, her voice impatient. Youthful flesh covered her skull. Her cheeks turned pink; her eyes sparkled. Thick, shining hair cascaded down her back. “Do not suppose, mortal, that you can command me. I came because I was curious. Mortals run from me; they do not request my presence.”

That I could believe. Even in her youthful form, she was terrifying.

“I called you to ask you a favor.”

Nancy Holzner grew up in western Massachusetts with her nose stuck in a book. This meant that she tended to walk into things, wore glasses before she was out of elementary school, and forced her parents to institute a “no reading at the dinner table” rule. It was probably inevitable that she majored in English in college and then, because there were still a lot of books she wanted to read, continued her studies long enough to earn a master’s degree and a PhD.

She began her career as a medievalist, then jumped off the tenure track to try some other things. Besides teaching English and philosophy, she’s worked as a technical writer, freelance editor and instructional designer, college admissions counselor, and corporate trainer. As Nancy Conner, she writes how-to and reference books on topics ranging from classical mythology to using Office 2010.
Nancy lives in upstate New York with her husband Steve, where they both work from home without getting on each other’s nerves. She enjoys visiting local wineries and listening obsessively to opera. There are still a lot of books she wants to read.

Want to win your choice of a Deadtown novel? Enter the tour wide giveaway below!


a Rafflecopter giveaway
Posted by Unknown at 1:00 AM