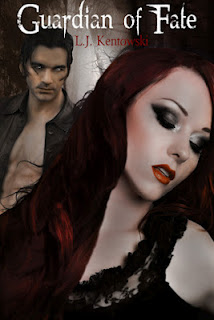 Fear of death is all too common. Visions of it chill the bones and skip heartbeats. Seeing it coming and knowing only you can rescue the soul of the victim from the fiery bowels of hell…that’s downright life-altering.

Cassandra Cosgrove’s life was altered at the age of sixteen when she found out that it was her responsibility to save the lives, and ultimately the souls, of innocent victims targeted by Hell’s demons. As impossible as it seemed at first, she was able to live a fairly normal life, while secretly fulfilling her obligation as a Guardian of Fate.

But years later Fate has its own plan when her visions begin drastically changing at the same time two mysterious men appear in her life. Cassandra suddenly finds herself caught in a battle between good and evil, with her own soul on the line. When it seems everyone in her life has a secret they’ve been hiding from her, who can she trust to be the Guardian of her Fate?

He reached his arm across my body, and I trembled from the mere breeze of his action. Holding my breath, I froze. My eyes were the only thing capable of motion, as I watched him open up the console and grab a tissue. I was so hypnotized by him that I couldn't even form the words to ask him how he knew they were there.
He offered it to me, and I took it slowly. As I wiped my nose, he continued to watch me, his body still too close to mine. Even after I was finished, I remained frozen in my awkward position, afraid to move. Emotions warred within me. My mind told me that I should be terrified of this big, powerful man, whom I just met. Crouching in front of me, he was close enough that I wouldn't stand a chance of escape if he chose to attack me, but something deep inside made me feel safe with him. Maybe it was because I felt I knew him from all the years I'd dreamt of him. Maybe I just had a death wish.
My emotions battled silently, and my pent-up breath rushed through my lips in a pant. As his eyes moved to my mouth, the air between us suddenly felt so thick, I thought I might suffocate.
He moved away from me, but remained crouched next to the car.
"Are you okay now?" he asked.
"Yes."
He stood up, and I was struck by an incredible urge to make him stay, if only for a second longer.
"Hunter, have we met before?" I blurted out. It wasn't just a question to keep him near me I had to find out if, somehow, he knew me too.
He looked at me for a moment with his head tilted slightly to the side, as if a better angle might help him place me. Slowly, he crouched next to me again, causing me to lean back once more.
"No, we've never met."
Not willing to come to terms with the fact that I was the only one who could feel this powerful connection between us, I asked, "Are you sure?"
"Cassandra, if we had met before," he said in a deep, almost seductive voice, "I assure you, it would have been memorable."
My body shook from the meaning of his words. I was sure that he had me under some kind of spell, because I didn't realize he'd actually moved in closer. Wiping a stray tear from my cheek with his thumb, his fingers rested softly against the side of my head. His touch was so light, I would have considered it a mere caress, if not for the burning sensation it left when he pulled it away. My hand immediately flew to the spot he had touched, and I stared at him in astonishment.
"I should apologize for being so forward as to touch you," he said, "but I'm afraid I'd do it again if given the opportunity." Standing up, he continued, "I hope your mother is well. Maybe we'll see each other again."
I felt as if I were in some crazy trance that I couldn't shake, so it took me a minute to process what he said. As he started to walk away, I stood up and called, "I thought you were just passing through?"
I heard him laugh, and then he stopped and turned around. The smile was still on his face when he told me, "I was, but I'm starting to like what I see here, so maybe I'll stick around for a bit longer." The shocked expression I wore was starting to feel like a permanent facial feature tonight. It remained in place as I watched him turn back around and walk into the night.

I liked the book for its plot twists and the interesting take on fate and preventing souls from being taken to Hell. Trying to stop people from being taken by demons, Cassandra uses her visions to try and even the playing field in a war between good and evil. Sometimes her decisions made me want to scream "Don't!!!" (like in a horror movie). Secrets abound and the two hunky men were fun. Pushing limits and taking us on a journey that is driven by fierce characters, passion, regret, angst and lots of drama, this book captured my interest. I will be waiting to see how it ends up with Hunter...

L.J. Kentowski is living in disguise as the author of her debut novel, Guardian Of Fate, working diligently on the subsequent novels in the Fate series. Her true identity as Supermom and Superwife, living in the Midwest with SuperDog must never be revealed without security clearance. Every day, after tucking in her 6yr old talking prodigy, she rips off her cape and delves into the world of angels, demons, and the in-betweens.