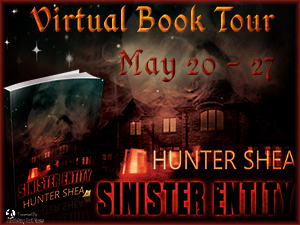 How can you escape the ghost of yourself?

The Leigh family is terrified. They’ve been haunted by the ghostly image of their young daughter, Selena. But how can that be, when Selena is alive and well, and as frightened as her parents?

With nowhere else to turn, the Leighs place their hopes in Jessica Backman, who has dedicated her life to investigating paranormal activity.

Accompanied by a new partner who claims to be able to speak to the dead, Jessica will soon encounter an entity that scares even her. And a terror far worse than she imagined. 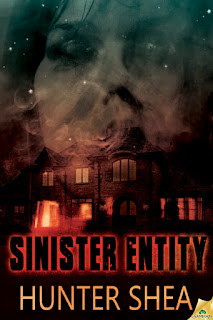 Excerpt:
“Kitchen drawer just closed so hard, the wood cracked. Time is two-forty-eight a.m. I dared the EB to be more demonstrative and it’s taking up the challenge. The air smells funky, like burning wires. No signs of smoke.” She stopped. Something started tapping on the walls around her.
Tap-tap, pause, tap-tap-tap, pause, tap.
Jessica continued, using meditative breathing exercises to calm herself, “I hope I caught that. It’s tapping out in a sequence.” Tap-tap. “Two taps, followed by three, then one. I’m not sure if it’s some form of Morse code or the beat to a song or what. It just keeps tapping, and the burning smell is getting stronger,” she whispered into the audio recorder. Then, much louder, “Are you trying to tell me something? If you speak into this recorder in my hand, I may be able to hear you. What does the tapping mean? Or are you just trying to scare me?”
A heavy rumble shook the floor beneath her feet.
Tap-tap-tap.
Tap.
Tap-tap.
Jessica put the recorder close to her lips. “I’m going to have to check the outlets. The burning smell is getting intense. Something ˗ whoa!”
The recorder was knocked from her hand and skidded across the linoleum floor. The hand that had been holding the recorder felt like it had been dipped in a tub of ice. She gave it a few sharp shakes to halt the pins and needles sensation that followed.
The house was once again silent and the darkness seemed to intensify. Even though her eyes had acclimated to the night, she was finding it harder to make out the shapes of the furniture around her. It was as if a heavy, black gauze had oozed throughout the house like an obsidian blob.
She took a few tentative steps towards where she assumed her digital recorder lay. The air itself was heavy and she knew she was far from alone. She fought hard to fight back the tingling dread that threatened to dance up her spine. A part of her was sure that something was very close behind her. Silently, it approached with arms wide open, edging closer with each deliberate step. If she were to turn around now, she would come face to face with all of her worst nightmares brought to life.
If only she dared to take one simple peek.
In the dark.
So close she could feel the ripples of its intrusive essence caressing the back of her neck.
Jessica stopped when she reached the threshold of the dining room and closed her eyes. She felt like a blind person in a crowded room of silent guests, no one daring to breathe lest they reveal their presence to the woman in their midst, yet eager to pounce if she gave the slightest inkling that she was aware of their proximity. Her heart skipped a beat as she breathed deep. The fight or flight instinct was battling for control. Her body was in the throes of the primal, physical ache to flee. It would be so easy to run now. The front door was only twenty feet away. Just turn a couple of locks and she could be outside.
The floorboards creaked behind her, a slight groan of wood protesting the weight of a single, heavy footstep.
Three more breaths. Her heart rate slowed to a steady rhythm.
Another creak, this time to her right, near the breakfront.
Jessica smiled and she felt the tension release its grip from her shoulders.
Breathe in, hold, breathe out.
Something hard and small smacked into the glass top of the coffee table.
Breathe in, hold, breathe out.
The sound of glass under stress, spider cracks crunching their way across the surface of the table.
Now!
Jessica turned quickly and shouted “Boo!”
The coffee table top exploded in a shower of glass pebbles as she faced the empty darkness behind her. Bits of glass bounced harmlessly off her leather jacket. A picture frame flew from the fireplace mantle and crashed into the opposite wall. All of the kitchen chairs slid out from under the table at once, one of them falling completely backwards. Jessica turned back towards the living room in time to see the blinds on the front window part as if someone ran a finger from top to bottom. Upstairs, it sounded as if a brawl had broken out. The ceiling fan shook under the pounding of footsteps and falling objects.
The house was alive and it was not happy.

Why Ghosts Scare the Hell out of Me

Did you know that almost half the people living in the US believe in ghosts? In a recent Huffington Post/You Gov poll, they found that 45% of Americans believe that ghosts are as real as Walmart and the deficit. Other polls have shown that 60-70% believe in life-after-death. Sure, not all of that ‘living’ entails becoming a shadow haunting their former house, but it is staggering to see how many of us feel that our souls live on after our bodies have given up the….well, ghost.
Right now, zombies are the talk of the town, just like supernatural serial killers (Jason & Michael Meyers), vampires and werewolves were the rage in eras past. Some great books and movies have come out of those subgenres of the horror world. But here’s the thing. They’re all make believe. I know when I go to sleep, Freddie Krueger is not going to slink into my dreams and choke me to death with Obama’s dirty socks. If you dropped me in the Transylvanian forest today, the last thing I would be worried about was blood thirsty vampires. I do see zombies when I go to the supermarket at 2pm on a Tuesday, but most don’t have teeth and none try to bite me.
Now ghosts, they’re another story altogether. I’ve seen one numerous times in my house, as have others. I was once grabbed by a phantom hand in an empty hotel room. No matter what their origin, I know they exist. Are they the dead, a product of a collective unconscious, inter-dimensional travelers? I have no clue. Like half the people living with me here in America, I do believe. And when the house is dark and quiet and I get that feeling that something is standing right behind me, I wish they were as fabricated as the Mummy.
So, I write about ghosts. My ghosts. Your ghosts. The spirits you walk through unawares when you enter your bedroom or head to the deli for a cup of coffee. Because they are all around you, watching, listening, judging, interacting, maybe even reading over your shoulder as you consider whether or not to leave the light on tonight.

I have had and will not have much sleep until I get this book read. Just saying it right now. From page one, it grabs you by the throat and keeps you reading into the night. I love Jessica and her ghost hunting  habits and combined with the other elements in the book (not saying-not going to spoil it for you!) it has been a roller coaster ride that I have no intent of stopping. If I was off tomorrow and didn't have a million writing deadlines of my own this week, you can bet I would be holed up with a bucket of movie theater popcorn and a 2 liter Mountain Dew reading my way through this baby. I was to page 54 last night without hardly noticing the time. When I actually looked up, it was 2am and I remembered I had to work in the morning. So, yes. This one is a paranormal drama with multiple elements and a great scare factor that will have you looking a little harder at the dark corners in your house.

5/5 For a great suspenseful read, paranormal elements that wouldn't let go and characters that feel so alive, they have become people I might actually want to know in real life. Dialog and action are perfect! I will be looking for more from Hunter Shea you can bet on that.

I received a copy of this book in exchange for my honest review. 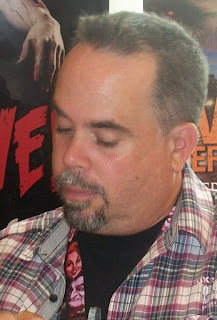 Hunter Shea is the author of the novels Sinister Entity, Forest of Shadows Swamp Monster Massacre and Evil Eternal. His stories have appeared in numerous magazines, including Dark Moon Digest, Morpheus Tales and the Cemetery Dance anthology, Shocklines : Fresh Voices in Terror. His obsession with all things horrific has led him to real life exploration of the paranormal, interviews with exorcists and other things that would keep most people awake with the lights on. He lives in New York with his family and vindictive cat. He waits with Biblical patience for the Mets to win a World Series.

Want a chance to win a copy? Make sure you follow the blog and enter the form below!

5 ebook copies of Forest of  Shadows

1 signed copy of Sinister Entity open to US Shipping


a Rafflecopter giveaway
Posted by Unknown at 2:00 AM

Most pictures are from Photobuck and belong to the artist.. Powered by Blogger.
Shelfari: Book reviews on your book blog